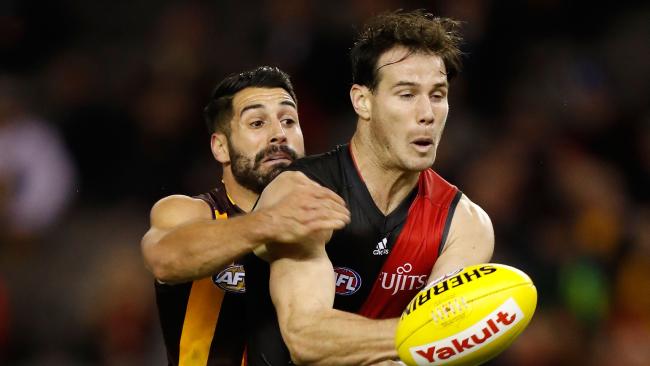 AFL: Essendon captain Brendan Goddard has arrived in Perth ahead of his sides’ clash with the West Coast Eagles

ESSENDON has made one change for its daunting trip to Perth to take on West Coast, which named defender Mitch Brown for his first senior game in almost 18 months.

The Bombers, which are coming off a bye, brought back Matt Dea to replace Patrick Ambrose who is battling back soreness.

West Coast ruckman Scott Lycett has paid his penance and has been recalled to the senior team.

Lycett was dropped from the Eagles’ Round 13 team after a late-night drinking session but responded with a best-on-ground performance in the WAFL.

The Eagles, which also had last weekend off, also included Patrick McGinnity for his first game in 2016 and Jackson Nelson.

LAST CHANCE! TAKE THE FOOTY FANS SURVEY TO HAVE YOUR SAY ON FOOTY’S BIGGEST ISSUES

But it was the inclusion of Brown that came as a big surprise.

Brown hasn’t been sighted at AFL level after rupturing the anterior cruciate ligament in his left knee in Round 1 last year before a finger tendon injury during the NAB Challenge delayed his return.

“This is his first game back since Round 1, 2015 and I think expectations… just compete as hard as you can, that’s about it for him.

“It’s good to have him back in the side, he’s really good around the club and really professional for us. He’s earned his spot.”

The bookies are giving Essendon no chance of landing an upset with West Coast the shortest possible price of $1.01. The Bombers are $19. French Open 2016: Novak Djokovic marches into Round of 16, faces Roberto Bautista Agut next