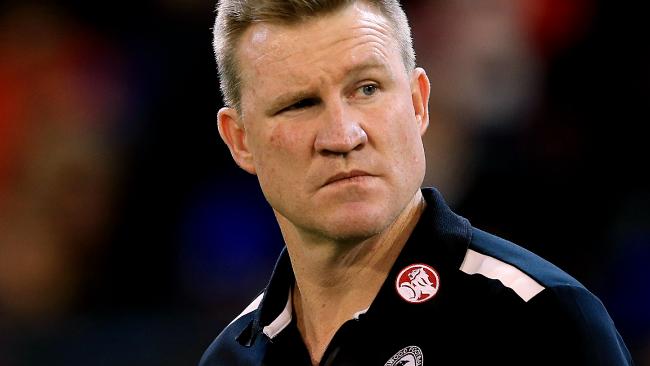 ‘I find it impossible Bucks thinks that’

AFL: Collingwood coach Nathan Buckley says he is a fan of the bye and there are benefits.

Cat’s out of the bag.

The three-week bye period from round 13 to round 15 has come under fire from players and coaches this week with some declaring all teams coming off a round 13 week off had a competitive advantage heading into last week’s round of fixtures.

Teams coming off a bye won four of the six matches in round 14.

Lowly Gold Coast threatened to cause an upset against new ladder leaders Hawthorn in Tasmania and Carlton was competitive in the first half before getting blown away by GWS at Sydney Olympic Park.

Carlton and Gold Coast were the only two teams coming off a bye to lose last week.

Buckley’s team walloped Fremantle at the MCG by 48 points after its bye.

Little wonder the Magpies great is comfortable with the current schedule.

“Whether it’s three or four or five per cent, you’re better. Mentally and emotionally you might be better off because you get to re-set yourself and go again.

Everyone’s happy after a win.Source:Getty Images

“Every week you get to re-set yourself and go again, but it does change the timetable of your routine.

“I like the idea that the byes are in there, I think they’re important for players and coaches.

“I acknowledge the idea of the AFL to maintain continuity and to have three weeks of six games each.

“There are inequities everywhere (in the draw) and the breaks leading into games, out of byes, is simply one of them … I think it’s okay.”

Scott had to interject.

“I find it impossible to believe that Bucks actually thinks that,” Scott told AFL360.

“We should fix it next year if it’s possible.”

But Scott also acknowledged that his concerns will be heard.

“Do you know in my experience what… (AFL chief executive Gillon McLachlan) will say,” Scott said.

“‘Yeah, we can probably do that a bit better’ — which is a great attitude to have,” Scott said.

It may not be as easy as that.

Sydney Swans defender Ted Richards said players are not impressed at the lack of rest time they are given during a season.

The other side of the story.Source:Getty Images

The AFL dropped one of the two bye rounds at the end of 2014 having had to shorten the 2015 season to cater for the cricket World Cup.

But it decided against reintroducing the double-bye season for this year.

The second bye week for players is now held following round 23 and before the first round of the finals series in order to stop clubs resting players in the final round of the regular season.

“We’re quietly filthy that the AFL hasn’t given us the two byes that we’ve been requesting,” Richards, who sits on the AFL Players’ Association board, told Melbourne radio station RSN on Wednesday.

“From a player’s perspective, there’s a lot of merit to having two byes evenly scattered throughout the season for all teams,” he said.

“While it’s great that we have football on every weekend during the season, I can’t help but think how unfair it is to see rested teams coming up against sides that have played the previous week,” Bolton told AloneSports.

It follows calls from AFL Players’ Association (AFLPA) general manager of player relations Brett Murphy for the league to immediately return to a two-bye annual fixture next season.

The bye rounds are one of the key issues being thrashed out by the AFLPA and the AFL in their ongoing Collective Bargaining Agreement (CBA) negotiations.

The existing CBA expires at the end of this season. Crows back women’s team to the hilt Goodbye Arsenal, Ozil signs with “the biggest club in the world” Why Townsend had to come home