AFLBrown back, Mackenzie to stay in WAFL 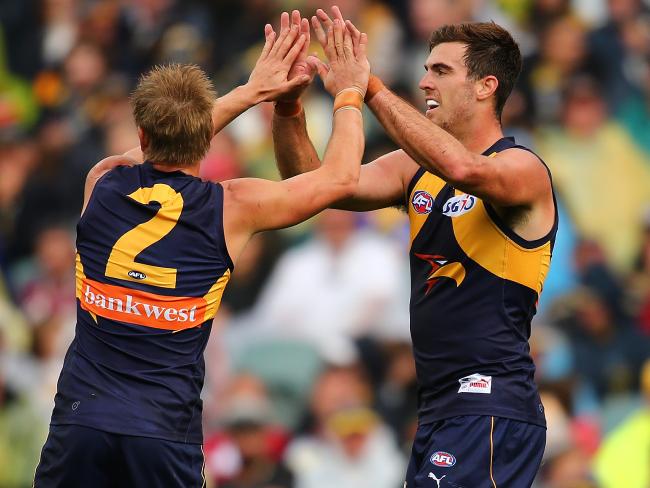 Brown back, Mackenzie to stay in WAFL

MITCH Brown will play his first AFL game in more than a year in West Coast’s Thursday night home clash with Essendon.

But the news wasn’t so positive for fellow 2015 knee injury victim Eric Mackenzie, who will remain at WAFL level for another week as he chases confidence and form.

Inside midfielder Jack Redden has been dropped, along with ruck duo Fraser McInnes and Jon Giles. Josh Hill was not considered due to illness.

Brown will return to the top flight after injuring his knee in last year’s season opener against the Western Bulldogs, requirinbg a reconstruction.

The 27-year-old has played three games for WAFL side East Perth since returning from a finger injury a month ago.

Mackenzie, West Coast’s 2014 club champion, has missed the past two games at AFL level after playing 11 straight to start the season, with the task of adapting to the pace of the top level proving challenging.

He was named an emergency for Thursday’s clash along with Xavier Ellis and Liam Duggan.

“He’s just struggling for a bit of form at the moment,” Simpson said of Mackenzie.

“So coming off his knee and trying to adapt to the way we play and where the game is at the moment. It’s changed a bit since 2014.

“So we’re trying to get him some form. At the moment he’s doing that at East Perth.

“The guys is coming back from a knee, playing in that role. That’s the biggest thing.

“Don’t worry about positioning or anything like that. It’s coming back from a knee reconstruction and having confidence in your body.

“I think that’s the thing that everyone works through in their first year back and not many players just come back in and go straight back into it. Not key position players. We’ve got to give him a bit of patience.”

Star ruckman Nic Naitanui is tracking well in his rehabilitation following achilles surgery, with Simpson saying the ruckman was “on schedule, if not ahead” of his 6-7 week timeframe for a return.

Naitanui spent time at training riding a scooter and walking up the stadium’s stairs as he builds fitness, with a return to running likely to be a week away.

“He was worried, and we were too — the big Fijian having an operation during the season and how you recover from that,” Simpson said.

“But his initial stages, early stages (indicate) it’s been a success. How he recovers in the next week or two will determine how quickly he gets back.”

Lycett will return from a club-imposed suspension against the Bombers, with doubt emerging over Hill on Wednesday morning after the goalsneak was absent from training.

Redden trained with the club’s development unit along with McInnes and Giles.

Simpson revealed 2004 Brownlow Medallist Chris Judd had visited the club to address its young talent ahead of this week’s 2006 premiership reunion.

“It’s probably around the professionalism and what it’s like to be an elite athlete, if he’s talking to our young fellas,” Simpson said.

“But we’ve got programs in place where we educate different areas of our group. It was a good chance to take that opportunity.” Guardiola: This team plays the best football in the world